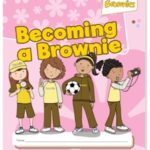 Here at 1st Waddington (RAF) Brownies, when a new girl joins Brownies for the first time, she is known as a Tweenie until she takes her Promise.  “A Tweenie” is a girl who is ‘tween not being a Brownie and being a Brownie“.

When we returned to face-to-face in September 2021, Snowdrop took over as our Tweenies mentor.  Our Tweenies were also allocated a Brownie Buddy – an older and more experienced Brownie.  Due to having so many Tweenies this term, our Brownie Helper Emily plus one other Leader assists Snowdrop each week to run the Tweenie programme.

This term’s Tweenies are Charlotte, Evie P, Grace, Holly, Paige. Sienna joined us in October with Anya & Emily S joining us after October half term.

All bar Anya & Emily are expected to take their Promise in December if they have completed our Tweenie programme and more importantly, feel ready to take their Brownie promise.

To help our Tweenies settle in, get to know everything about Brownies and prepare for their promise, we have a 6-10 week programme especially developed just for them.  Although, no longer an official part of the Brownie programme, we have decided to continue to use the excellent Becoming a Brownie book which teaches the girls everything they need to know about Brownies, the traditional Brownie story and helps them learn their Brownie Promise and Law.   We also run an adapted (printer friendly) version of the Mission Promise Challenge pack, another excellent resource written by another Unit which is full of fun activities to help reinforce everything covered by the Becoming a Brownie book.

We give the girls plenty of time to complete the book and the Mission Promise with 15 minute Tweenie sessions every meeting plus we’ll ask them to do an activity or worksheet at home too.  Depending on the age and capabilities of the Tweenies, the programme takes around 6-10 weeks to complete.  For use during their sessions, the Tweenies also have the loan of the official Brownie Handbook which goes into a more detail about Girlguiding in general.